We! Are! Here! The Exhibition is open! 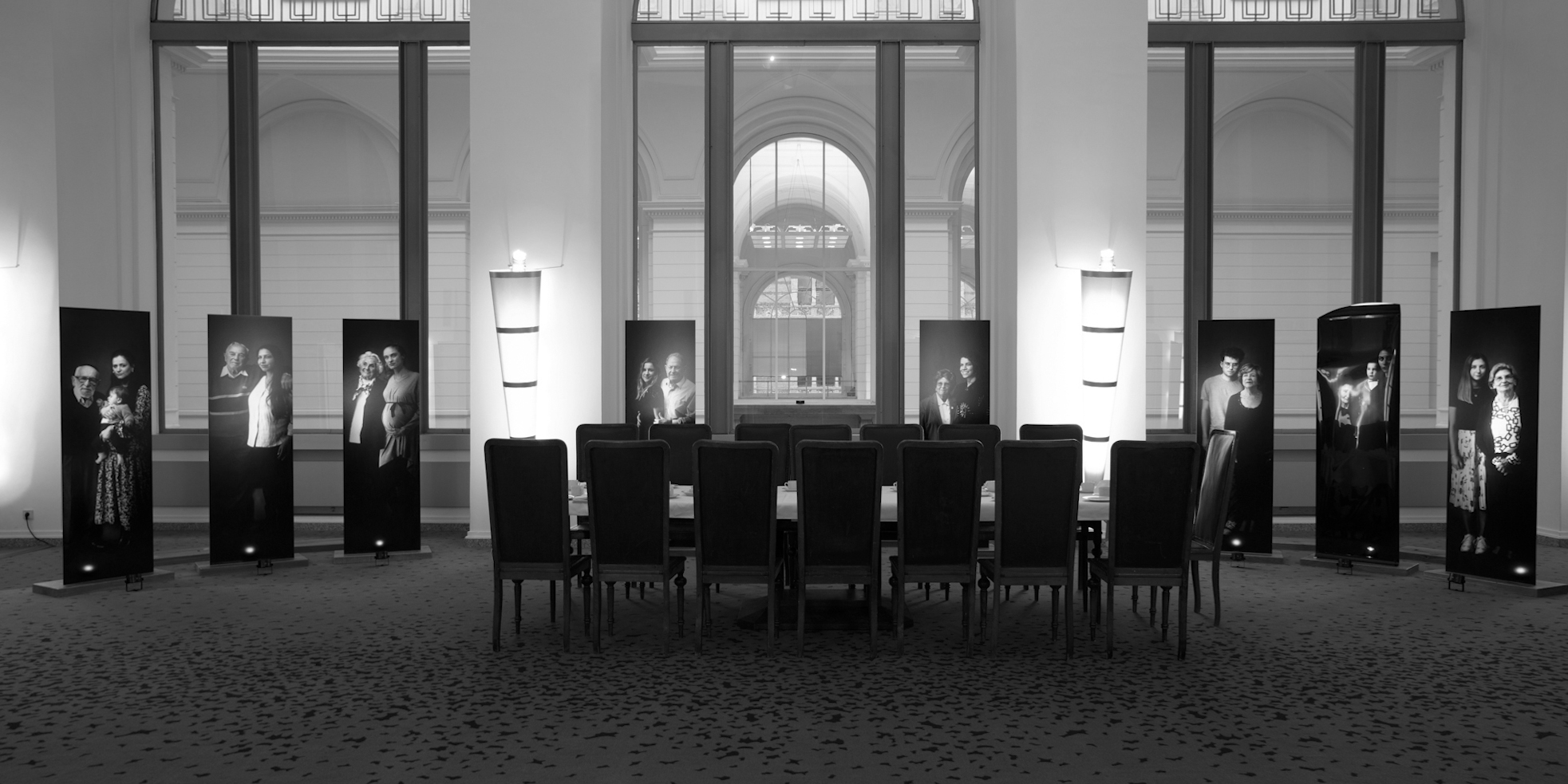 On the occasion the 80th anniversary of the Wannsee Conference, at which the murder of eleven million people was organized, I was invited by the Scholary Platform History & Documentation e.V. to deliver the fotographic-artistic part by portraying Holocaust-survivors together with their (great-)grandchildren in the IMAGO Camera. This project is one of the most touching works that I have been able to carry out with the IMAGO Camera so far.

We! Are! Here!
A photographic “Nevertheless!” on the occasion of the 80th anniversary of the Wannsee Conference commemorated on January 20th, 2022.
Survivors of the Holocaust and their descendants, in 15 full-length, life-size, portraits,
together with their thoughts on the Wannsee Conference.

Dr. Julien Reitzenstein, author and historian, prepared the historical-scientific basis for this touching portrait series of the survivors of the Holocaust together with their grandchildren and great-grandchildren.

What is special:
For decades, the perpetrators of the atrocity, in all their individuality, have been the focus of attention – whilst, on the other hand, “the victims” were generally spoken of as a depersonalized group.
These life size portraits raise the profile of the survivors and their families to the deserved predominant position, displacing the perpetrators and removing them from their previous position of historic dominance. Each of these IMAGOgrams shows a survivor together with a grandson or great-grandson. You see the symbolic, empty conference table of the Wannsee Conference, which appears as if it has just been abandoned. The crumpled cloth serviettes lie on elegant plates, between them lie the minutes of the conference – the death sentence for millions but, also, for those standing around the table. The perpetrators are gone, the survivors shout: “WE! ARE! HERE!” The science institutionHistory & Documentation e.V, which specializes in Nazi history, accepted sponsorship of the project “WE! ARE! HERE!.

All of these survivors – from Israel, England, Hungary and Germany – came to Berlin with their grandchildren and great-grandchildren for these portraits to be taken in the IMAGO Camera. And that in the midst of the pandemic! Without this admirable willingness the IMAGOgrams for the exhibition would not have been possible. We would like to thank you all from the bottom of our hearts!

Everyone involved in the project is also very grateful to the President of the Berlin House of Representatives, Dennis Buchner, for welcoming the premier of “WIR! ARE! HIER!” into the most important building in the German capital in terms of protocol. The installation with its IMAGOgrams is located in the lobby of the Berlin Parliament.

Dennis Buchner opened the artistic memorial installation with a speech which can be read through the link:
https://agh.berlin/wirsindhier

The exhibition will be on view in the House of Representatives until March 4th, 2022. Advance registration (due to the pandemic) is currently requested. Subsequently it is planned for the exhibition to travel around the world. Other survivors will be portrayed and the installation will be continually expanded.

We would also like to draw your attention to the following press:

Information on the project and schedules for further exhibitions of this project are permanently updated on www.wsh2022.de, where is as well a donation tool.

Susanna Kraus and the IMAGO Team

At the intersection of art and aesthetics, science and technology, self-awareness and the thirst for adventure, we conceive and implement customized formats for companies and institutions.
COMPANY PARTY
The encounter with the IMAGO Camera is an extraordinary experience, each IMAGOgramm a lasting value. Already the physical appearance of the camera and the uniqueness of IMAGOgrafie fascinate. Surrounded by gastronomy, club and event rooms at the Moritzplatz, IMAGO Berlin offers a place and experience for a tête-a-tête for special corporate events.
TEAM BUILDING
In the IMAGO Camera the portrayed are their own photographer, a group photo is true teamwork. Following on from this, we generate a tailored format in which your team will discover each other from new perspectives.
BRAND CAMPAIGN
The aesthetics of the IMAGOgramm are characterized by an engaging visual language. It is the starting point for campaigns with visual irreplaceability. Ideal for websites, product presentations, new collections or visual marketing campaigns.
EXPERIENCE MORITZPLATZ
Around Moritzplatz, a committed scene has been formed that recaptures the historical sites and shapes urban life. Based on the IMAGO experience, we create inspiring encounters between art, music, creative industries, new spaces and forms of work, city gardeners, clubs and salon enthusiasts with the format “Experience Moritzplatz”. Guided by its initiators, you will gain insight into the planning and execution of this much-discussed urban development project.
ART EVENTS
Each IMAGOgram is a work of art created by lighting designers in search of the expression of their originality. IMAGO is a platform for artistic expression and exchange. The ideal publication magnet for exhibitions, festivals and art fairs.